The Law Reform Commission published a report on the 11th of December outlines legislative responses that include the introduction of a cap on the amount awarded in damages during personal injuries claims. The Cost of Insurance Working group (CIWG), established in 2016 by the Department of Finance to examine factors contributing to the increasing cost of insurance and to identify measures to reduce this cost had recommended that the Law Reform Commission examine the constitutionality of the proposed cap.

An additional recommendation from the CIWG included the requirement of the Central Bank under the Central Bank (National Claims Information Database) Act 2018 which commenced on January 2019 to publish an annual report and establish this database. By providing statistical analysis on all insurers selling private motor insurance in Ireland regardless of country of authorisation, the Central Bank’s drive of transparency has as its aim for consumers to have clear information and to make informed decisions.

This had also resulted in the new regulations being published last month requiring motor insurers to provide a quotation for each policy option available to the customer such as comprehensive, third party fire and theft cover or third party only in addition to extending the renewal notification period from 15 to 20 working days.

Arguably, steering customers away from comprehensive cover may not be in their best interests, even if the goal is to be transparent. And with the heaps of documentation customers are often buried in the detail.

But how effective is the Central Bank’s Report?

Gerry Hassett, Interim CEO of Insurance Ireland has defended the industry stating that, “The data in this report highlights the importance of the cost of claims to the market as it is the largest cost paid by insurers. Insurers have seen a 64% increase in average cost of a claim from 2009-2018 with the lion’s share of this inflation coming from 2013 onwards.” (click here to view Insurance Ireland’s website).

Litigated settlements costing more that €100,000 accounted for 15% of claimants settling through litigation but account for 53% of total litigated costs and involve a number of large settlements. The figure below shows the types of claims per year. 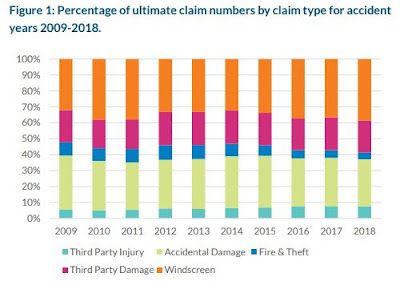 Nevertheless, the cost of premiums has undoubtedly increased for motorists and businesses alike forcing some operators like the Oktoberfest organisers in Dublin’s IFSC to cancel their event citing the cost of insurance. Perhaps the solution to satisfy both market participants and consumers and business is as simple as the law on a free market economy: supply and demand. Get more insurers into the market, support the Gardai in shutting down ghost insurance brokers and provide more choice for consumers. Nevertheless, whilst the debate around insurance claims and the knock- on effect these claims have on insurance premiums is set to continue into 2020, the Central Bank’s pursuit of transparency has certainly achieved one thing- politicians in a scrum for what can only be described as a political football.

If you’re an insurer looking to enter the Irish market and you’re looking for authorisation, contact RegSol for a quote.