The Pensions Auto Enrolment system is a government initiative set to supplement the state pension and prevent the ticking time bomb that is Ireland’s growing ageing population and the decline of workers with private pensions. Latest CSO figures released on the 6th of January 2020 show, that over a third of those without a pension say they cannot afford the additional living expense.

As the State pension is paid at a flat-rate, rather than earnings-related, workers without retirement savings are exposed to a greater risk of poverty upon retirement. Among those who have no pension, more than half stated their employer did not provide one. The Government, in their Roadmap for Pensions Reform 2018- 2023 plan to launch an “auto- enrolment” pension scheme sometime in 2022 (although previous promises included a launch date for 2020 and then 2021).

This plan is available by clicking HERE 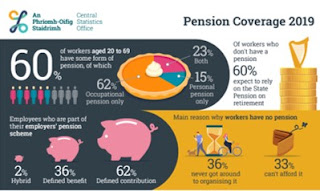 The new State pension system will come into place based on a “total contributions approach” where a person’s lifetime contribution will more closely match the benefit they receive. It will apply to approx. 585,000 private sector workers, aged between 23 and 60 earning more than €20,000 with their contributions rising until it reaches 6% in the 10th year of contributions. Workers can opt out should they so choose.

As outlined in the Pensions Roadmap the Pensions Authority will seek greater powers of enforcement to secure confidence and gain legitimacy from the Irish consumer in order to ensure governance codes and standards, systems of internal control, fit and proper key function holders, reasonable outsourcing and depositary arrangements, conflict of interest polices, risk management policies and internal audit policies are properly complied with. On the 15th of January, the Pensions Authority in an action taken against the directors of Rock Solution Options Limited were fined

Despite this and as the general election looms, Auto Enrolment looks likely to be postponed yet again. It is however important to mention that its benefits of implementation cannot be underestimated. The UK and New Zealand have already implemented the system with positive outcomes. The UK for instance has seen a dramatic impact on the participation of ethnic minorities and young adults in pension saving. According to the Pensions Regulator in the UK, 84% of 22-29 year olds were in a pension scheme in 2018, compared with just 24% in 2012.

For Employers, despite an existing obligation to facilitate access to a pension, auto enrolment still represents a daunting impact on businesses in terms of additional administrative time and costs to put in place and maintain a pensions scheme. However, for brokers and trustees, this represents a unique opportunity to be service provider of choice for employers and employees alike.