The Department of Justice and Equality publish annual reports; the purpose of this is to provide details on Ireland’s response to Money Laundering and Terrorist Financing taking into account: the legislative regime; international dimensions; the regulatory framework; enforcement; and supervisory authorities. Although the Department just recently published the 2018 report at the end of February 2020, we are still awaiting publication of the report for 2019. Figures for 2018 show almost 24,000 suspected cases of money laundering or terrorist financing were reported in 2018 a decrease of almost 2% on the previous year. A smaller number of cases — 23,442 — were reported to Revenue, despite the requirement to notify both the Gardai and Revenue of all suspect activity.

The key takeaways are:

By way of an example the report provides illustrations of compliance with legislation for certain sectors. The table below shows how Trust Company Service Providers (TCSPs), Private Members Clubs (PMCs) and High Value Goods Dealers (HVGD) have adhered to their compliance obligations: 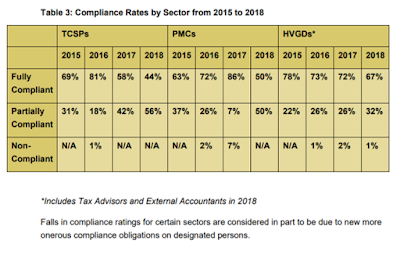 The report also indicated that work on transposing the 5AMLD should be completed by early 2020. The Directive extends the rules on the use of virtual currencies, clarifies the requirements of the beneficial ownership register and clarifies the minimum enhanced due diligence protocol when conducting financial transactions.


To view the report in its entirety click HERE